Eurofins Food and Water Testing UK and Ireland has announced the appointment of Richard Shepherd as General Manager of its Grimsby site, following the retirement of Harry Hellam earlier this year. 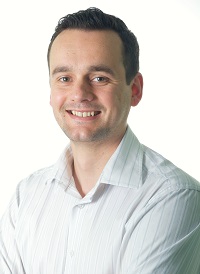 Richard, 38, will take over the reins in Grimsby after overseeing the consolidation of the Eurofins Newtec site and plans to bring about an enhanced commitment to client and customer services.

The Grimsby laboratories are among the busiest of the Eurofins Food and Water Testing sites serving clients from across the north of England and southern Scotland and boast large microbiology and chemistry testing facilities.

Richard joined Eurofins in May 2017 after 16 years with ALcontrol laboratories, most recently as Regional Operations Director. He said his immediate objective was to put customer service “front and centre” of the operation.

“We need to do this so that absolutely everyone understands its importance and in order for it to breed customer loyalty,” he added, “There will be under the bonnet changes to ensure robust business infrastructure and enhanced processes, which will then lead to first-rate customer service.”

“Ultimately I want to grow what we have in Grimsby, and to better integrate the site into the Eurofins model to diversify the offer to the customers in the region and utilise the reach of the Eurofins labs across the UK and Europe - if we can’t offer the testing at Grimsby, can we offer it elsewhere? What else can we add to our testing scope and what new markets we should be in?”

Richard said he saw a bright future for the site, with a potential positive effect on jobs.

“The job creation angle is linked to getting customer service right,” he said. “We need to move the business forward and bring the right contracts in and then be ready and ahead of the curve, managing the growth by having effective recruitment plans”

“If we can further improve the core infrastructure and enhance the customer service culture, then that will bode well for growth and job creation.”

Phil Coles, Managing Director of Eurofins Food Testing UK and Ireland, said: “Richard’s appointment and his immediate priorities are deliberate in order to meet our growth objectives and to meet and exceed our clients’ requirements going forward.

“Grimsby is a key site for us and so having strong commercial relationships there will be crucial to the future performance of the business and I’m delighted that we’ve been able to attract someone of Richard’s ability and reputation.”

Eurofins Food and Water Testing UK and Ireland is made up of 9 world-class laboratories and is the world leader in food, feed and water testing, offering a comprehensive range of state-of-the-art analytical techniques to support customers' increasingly stringent quality and food safety standards.

It employs more than 300 people and has recently invested nearly £3million in a two-storey extension to its laboratory and head office in Wolverhampton and £7m overall in new laboratories and laboratory extensions.

The company is part of Eurofins Scientific, an international life sciences company which provides a unique range of analytical testing services to clients across multiple industries worldwide.